Posted on October 2, 2015 by EditorialTeam

Bakery owners Aaron and Melissa Klein have been bullied, reviled and pushed out of business by aggressive homo-fascists  intent on forcing them to bake a cake with a “gay marriage” logo on it. Their business, Sweetcakes by Melissa, in Gresham, was sued by  a lesbian couple, Rachel Cryer and Laurel Bowman, who demanded to buy a “wedding cake” when they were having a commitment ceremony (it wasn’t even a marriage by state law). The Kleins did not refuse to serve them, they simply refused to make a “wedding” cake for something that they did not consider to be a TRUE MARRIAGE.  This happened in 2013.

There were dozens of other shops Cryer and Bowman could have gone to, but they didn’t want to be reasonable. They complained to “gayrights” groups who came and demonstrated outside the store. They sent the  story to the newspapers and got the Kleins labelled “haters ” and “homophobes” etc all over the media. The LGBT groups succeeded in getting enough people to boycott the shop to make it close down.

Even that wasn’t enough for these nasty lesbians. They saw their chance to make an easy buck out of the incident, and went to court demanding damages for “discrimination”. On July 2nd this year, the Oregon Bureau of Labor and Industries ordered the Kleins to pay $135,000 in damages.  It was an outrageous verdict, and the Kleins gained a lot of sympathy from pro-marriage campaigners.

They went online and used crowd-funding to try to raise the money. To their amazement and delight, money poured in from sympathizers. They have so far raised well over $400,000.

BUT…it seems they have not paid the fine. If they don’t, they could be sent to prison, like Rowan County clerk Kim Davis, who refused to issue marriage licences to same-sex couples. Maybe the Kleins have been inspired by Kim Davis’s courage and have decided that it is better to take the tough route. By going to prison, they would make themselves into a powerful symbol of resistance to the new homo-fascist tyranny that has taken over America. 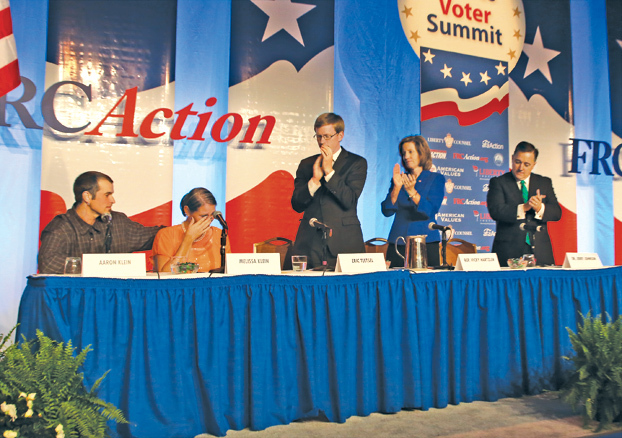 Aaron and Melissa Klein (far left) told the Family Research Council Values Voter Summit in Washington, D.C., in September 2014 they closed their bakery after they faced boycotts following Aaron Klein’s refusal to serve Rachel Cryer. “[My wife] has a God-given talent to create a work of art to celebrate a union between two people,” Klein said. “And to use that in a manner, that would be in the face of what the Bible says it should be, I just couldn’t in good conscience agree to do it.” IMAGE: Ron Walters/Light Productions