Got this from a friend of Millard’s. It would seem that Nicole Bonnet is nothing but a liar. <ADMIN>

Who is TWITTER TROLL @NicoleBonnet1 and Her Pathetic Sidekick Thomas A Mix?

In September 2012 the pseudonymous troll known as @NicoleBonnet1 showed up on Twitter. Her earliest Tweets are revealing. She admits to have always known she (or he) was a homosexual 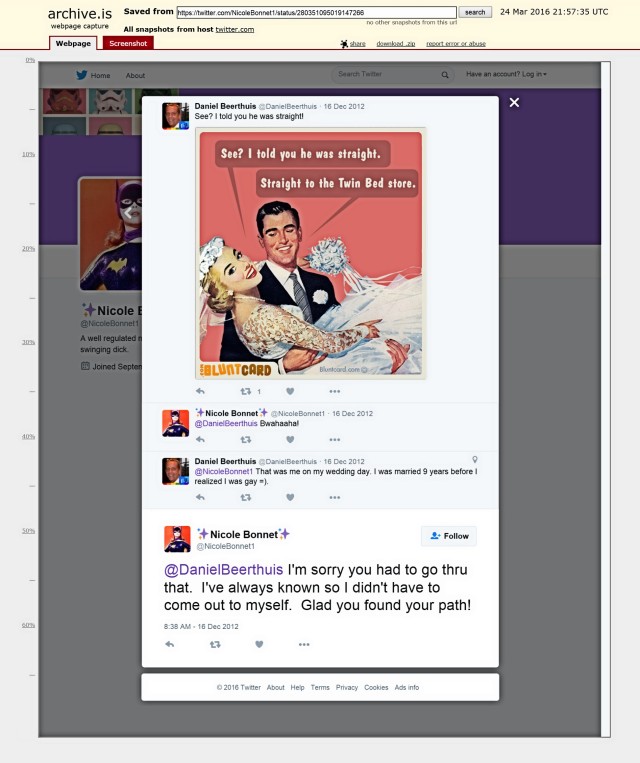 Since making that post she has now acquired a male “partner” who she (or he, we really don’t know), claims participates with her in the Pirate Tri at Point Sebago Resort.

Speaking of Maine @NicoleBonnet1 even claimed that that she severed meals at the Preble Street homeless shelter in Portland Maine and the day after she and her sorority sisters went to the Title Boxing Club. The problem is there is NO Title Boxing Club in Maine, anywhere. The closest one is in Vermont. Funny that. This troll wants to present an image that she is just so special. She is fit, thin and young; helps the homeless then hits it hard at the club. It’s all fiction. 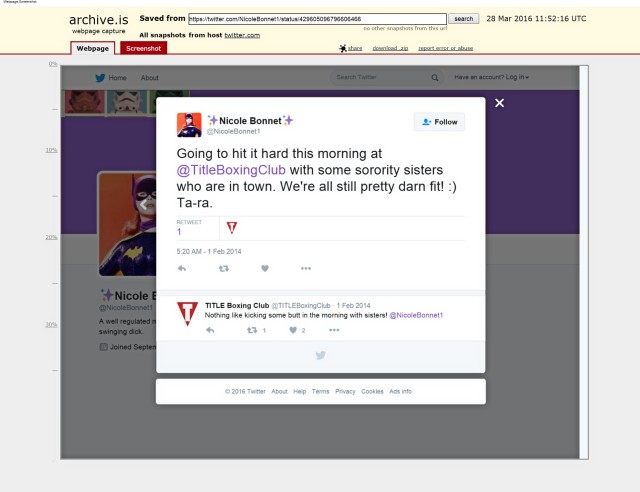 And before @NicoleBonnet1 was an “observant Jew” apparently she celebrated Christmas with her family. Odd isn’t it, an “observant” Jew celebrating Christmas.

Pseudonymous troll @NicoleBonent1 likes to pretend she is a crusader for social justice. What she really is, is a liar! Back in 2013 she claimed to have traveled from Maine to North Carolina to visit her “brother” Mike who she says is an officer in the Greensboro police department. And to meet with various groups and law enforcement to “expose” a senior citizen on safety disability retirement living in Lexington NC and have her “monitored” for having the wrong opinions. Never mind that local law enforcement does not “monitor” anyone and there were no “groups” that this disabled senior citizen belonged too. @NicoleBonent1 even claimed to have gone to this woman’s police department and her diocese. One problem, not only did she NOT go, she was making claims to have contacted both the wrong police department and the wrong Christian denomination. But what the heck, brain cell deficient Thomas A Mix of Vero Beach believes her no matter what! Does Thomas A Mix of Vero Beach even realize that if the cowardly Pseudonymous troll @NicoleBonent1 had REALLY done what she claimed that would be a REAL crime called stalking! 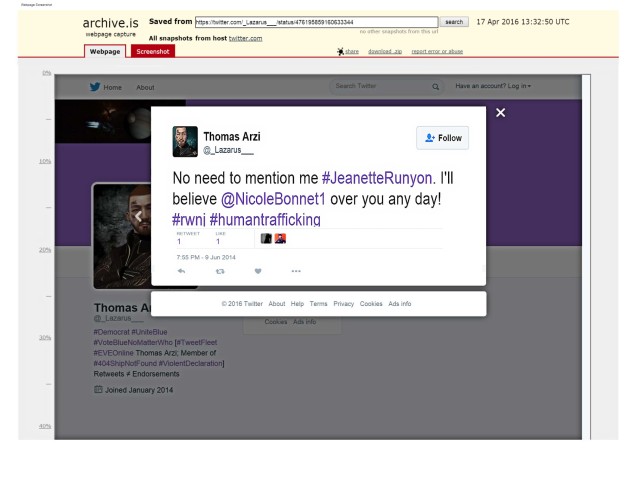 In a typical display of progressive/liberal hypocrisy Mr. Mix thinks it is fine for pseudonymous troll @Nicolebonnet1 to go into someone’s hometown contact various groups about this person in the hopes to totally ruin their life. In fact he is cheering her on hoping that Ms Runyon’s photography business is completely destroyed. And yet Mr. Mix goes all special snowflake if his name is mentioned; post a link or a full screen shot of a public Tweet he made and Thomas A. Mix has a full melt down with cries of stalking and harassment; yet Mr. Mix makes it quite clear, he is in favor of real life stalking when a person has the wrong (conservative) opinions.

If that wasn’t enough pseudonymous troll known as @NicoleBonnet1 then pretended to have contacted Ms Runyon family and in-laws. She even claimed that she spoke directly to Runyon’s Mother-in-law Arlene who gave her an “earful about J. and her years of antics”. Just one problem Arlene never met Ms Runyon not to mention Arlene was suffering from severe dementia, Arlene can’t even remember who she is. This is simply one more lie on the big pile of stinking lies told by @NicoleBonnet1 to impress strangers and to further incite gullible Thomas A Mix. 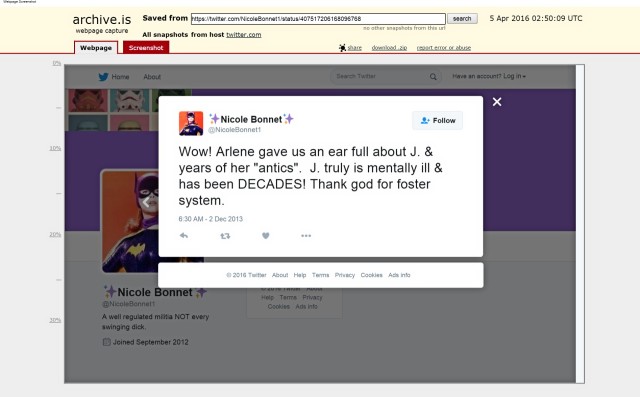 The pseudonymous troll known as @NicoleBonnet1 then lied about contacting Ms Runyon cousins. Assuming that @NicoleBonnet1 is not stupid and would realize that Ms Runyon speaks to her family members regularly, so this lie was posted for one reason only, to incite easily deceived Thomas A Mix and to puff herself up. Note how Mr. Mix likes this lie. He actually believes it, and he is clearly OK with real life harassment of Ms Runyon. But post one link to a newspaper article about his body building sister and Mix has a virtual mental melt down and falsely claims his family is being stalked STALKED. Hypocrite much? 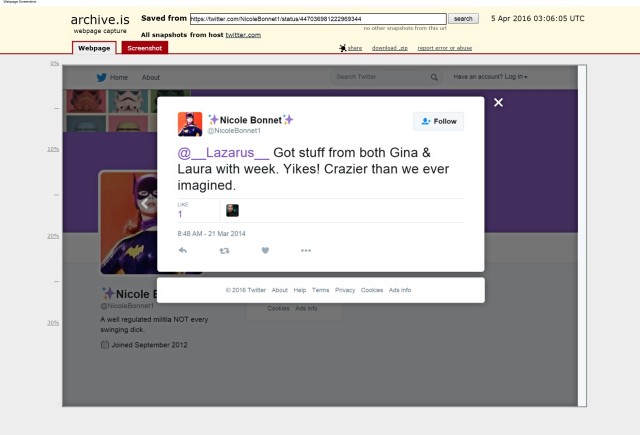 And if that were not enough she then piles on more lies and claims to have contacted Ms Runyon spouse’s colleagues in the ancient coin community. Once again this didn’t happen as well. Not one single of Mr. Woolslayer’s colleagues heard from the cowardly anonymous troll. One wonders about the mental health of a person who makes all these outrageous claims and the mental health of foolish Thomas A Mix who believes and cheers such outrageous lies and behavior. If Mr. Mix really believes @NicoleBonnet1 lies, then he is demonstrating that he is more than just fine, he is happy about the real life harassment of Ms Runyon. I wonder how he would feel if someone did the same to him? Oh wait he is a kind tolerant liberal therefore it is HARRASMENT/STALKING/HATE to do the same to him.

Of course @NicoleBonnet1 has to double down her libel and claim that military retirement and a VA check for service related disability is collecting welfare. Is she projecting her life on the dole, I wonder? Or maybe she just hates members of the military like so many of her progressive ilk do? 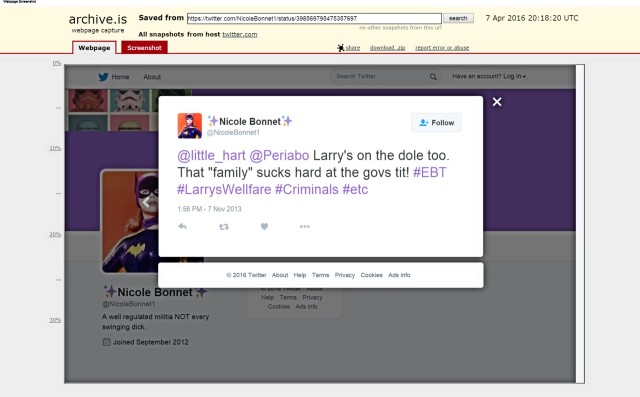 If these lies were not outrageous enough the pseudonymous troll known as @NicoleBonnet1 then claims that the NC-FBI phones and emails her every few weeks about Ms. Runyon’s hate crimes against her! An once again IQ deficient Thomas A Mix of Vero Beach Florida believes and hangs on every word she posts of about her pretend crusade against Ms Runyon. Of course there is no such report and the NC FBI does not call or email anonymous trolls and one can’t defame an anonymous persona.

According to the troll @NicoleBonnet1 merely mentioning that she claims to be Jewish is a “hate crime.” Then she claims that she informed the FBI that Paul Lemmen was also involved in stalking her, the anonymous troll that she is. This is insanely hilarious except as we can see, IQ deficient Thomas A Mix of Vero Beach believes all her lies completely. 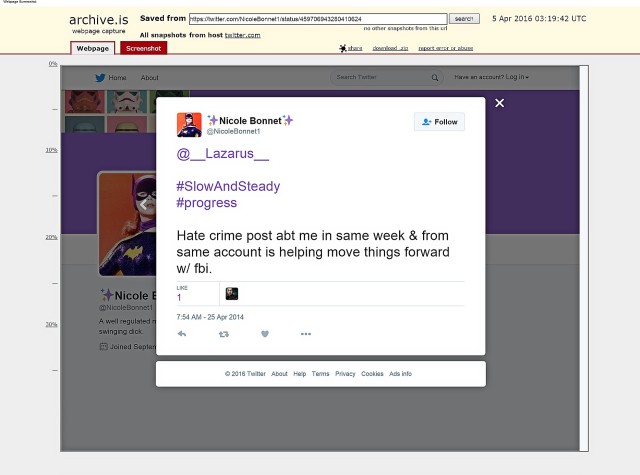 Stay tune to watch new players in the on going defamation and harassment campaign of Ms Runyon by a gang of “tolerant” leftists.  We will see how they completely destroyed her newborn photography hobby and part time business and how they incited people to send her pornography, falsely report her for Workers Compensation fraud and Social Security fraud claimed all her photos were stolen and spread the false rumor that her husband left her.

Making sure people know who the real bullies are.
View all posts by josephbenning →
This entry was posted in Uncategorized. Bookmark the permalink.
%d bloggers like this: