Posted on September 23, 2016 by josephbenning 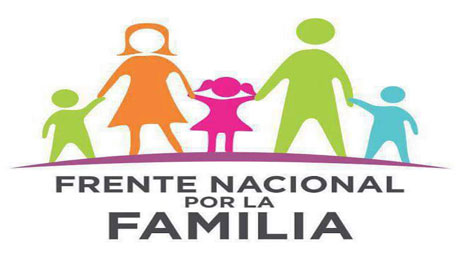 Tensions are rising in Mexico City as organizers of this weekend’s huge pro-family march prepare to send a strong message to the country’s Congress. The march and its message are virulently opposed by the Mexican mainstream media, the government, and the increasingly vitriolic LGBT activists.

Over the past week, the march and its organizers have been repeatedly attacked in the media around the country. In addition, say the organizers, there have been veiled threats by the government that foreign participants could be arrested (using a broadened interpretation of an article in the Constitution). But the organizers are continuing to push ahead.

A scene from the Sept. 10 march in Tijuana. This weekend’s march in Mexico City will likely be much bigger!

On Saturday, Sept. 10, the streets of 122 cities and towns across Mexico wererocked by pro-marriage rallies. Over a million people protested the efforts by the President of Mexico to push a national “gay marriage” law through the Mexican Congress. Several of Mexico’s 31 states and Mexico City have started to permit it on their own — but not the rest of the country.  The Mexican President has also started a nationwide pro-LGBT propaganda campaign, which also targets the schools.

The rallies were organized by a group called “Frente Nacional por la Familia” (National Front for the Family), in conjunction with religious communities across the country.

Spanish-language material from MassResistance was also used by organizers to inform people about what “gay marriage” would do to the country.

This Saturday, Sept. 24, another major pro-marriage rally is set for Mexico City to send a direct message to the Congress not to pass the bill. Citizens from across the country are expected to be there.

Logo advertising both the Sept. 10 march “in the states” and the “national” march in Mexico City.

Leaders of the Frente Nacional por la Familia told us that they had not anticipated the onslaught against them by the Mexican mainstream media.

The huge turnout across the country for the Sept. 10 marches appears to have taken the media by surprise. As in the US (and around the world) the mainstream media in Mexico is strongly pro-LGBT and aggressively biased against religious believers. In the past week, according to the leaders we have spoken with, the media has lashed out against the marches and the organizers. As one leader emailed MassResistance:

The media has been very, very hostile. They are using their resources to attack us. They cover all the gay activities in a positive light. But they will have 3 to 5 gay people against one of us in interviews and debates.

Earlier this year, pro-family activists got over 240,000 signatures on a petition to ban “gay marriage,” the adoption of children by gay couple’s and teaching about homosexuality in the schools. Marchers are demanding that petition be fulfilled by Congress. That has further incensed the media in Mexico.

Lacing their attacks with anti-American rhetoric. In addition, the media has been fanning the flames of anti-Americanism in their attacks on Frente Nacional por la Familia, one leader told us, apparently to intimidate them from getting help from American pro-family groups such as MassResistance.

Threats to arrest foreigners who participate in march

Originally, the leaders had asked Brian Camenker of MassResistance to travel to Mexico City and join them in the march and related activities. But this week Camenker got a phone call from them about a government threat against foreign pro-family people coming to support the march.

Article 33 of Mexico’s constitution gives the President the right to detain and deport any foreigner. It also states that foreigners may not participate “in any way” in the political affairs of the country..

This is usually interpreted by the Mexican courts as illegal voting or engaging in actual party politics. But occasionally it has been used by the government to arrest foreigners for a broad range of quasi-political activities, including participating in a protest.

This past week there have been not-so-veiled threats that any foreigner actively participating in the march or speaking out – particularly someone from an activist group like MassResistance — is liable to be detained and eventually deported.

On Monday the leadership team had an emergency meeting. They had planned to have foreign pro-family leaders participate in a press conference, be recognized with local leaders, and possibly even give speeches. All of that has been canceled.

They notified foreign pro-family people that they could still come as “observers” but they would have no role in the pro-family march and should not “speak out” in any way.

A different role for Brian Camenker

Given this new development, leaders of Frente Nacional por la Familia telephoned Brian Camenker of MassResistance this week to discuss what role would help the most.

Camenker could still travel to Mexico City as simply an “observer” of the march if he wished, they said. But they felt that staying in the US and using our news reporting skills and background knowledge would be more productive.

As their PR person described it:

I think it would be most helpful to us if you could write about the march and publish pictures, etc. Especially since we have so much negative press, it would be very  helpful to have positive impressions and reports on the March, which we will send to you, hopefully in real time. We very very mucho appreciate your support and help! It is very encouraging.

They emphasized that it’s important to quickly prepare a positive and knowledgeable report on the march that could be sent across the United States and to pro-family people around the world – to counter the expected hostile reports from the mainstream media.

Catholic Church pushed to the sidelines

People naturally believe that in a country like Mexico a large-scale pro-marriage action like these marches are mobilized by the Catholic Church.

One crucial fact we didn’t know is that the Catholic Church and all priests and other ministers are legally prohibited from organizing or lobbying on religious issues that come before the legislative bodies.

As one of the pro-family leaders emailed us:

This march is really coming from the people, not the Catholic Church. This is very important because of Mexico being a lay state and church and religious leaders are not allowed to engage politically or have public opinion on such matters.

This shows how powerful the secular left in Mexico is. And make no mistake: It’s what the American Left wants to do in the United States.

To be able to organize nationwide in this climate is a testament to the determination of the Mexican pro-family movement.

One of the advertising logos for this weekend’s Mexico City march.

Rallies in US to support Mexico’s fight for marriage!

California MassResistance has been mobilizing people to rally at the Mexican consulate in Los Angeles. And possibly some other MassResistance chapters around the country will be doing it.

We’ll have a full report on all of this as quickly as possible!