Another Church bites the dust. Just more bullying from the queer community because they “have to” be “included”. As a person, they have gifts, yes, but their profane behavior is NOT a gift…..especially when that behavior is responsible for the death of hundreds a years from HIV/AIDS. They really need to get their craniums out of their rectal orifice. <Editoralteam> 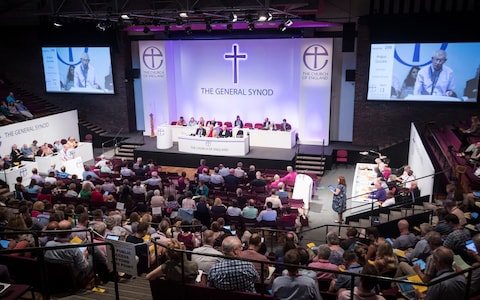 Transgender people are being encouraged to become Church of England vicars as bishops launch a diversity drive.

Bishops in the diocese of Lichfield have issued new guidance to parishioners and clergy reminding them that LGBT people “can be called to roles of leadership and service in the local church”.

The guidance, titled “welcoming and honouring LGBT+ people”, warns that the church’s reputation as being unwelcoming towards gay and transgender people is stopping young people attending.

“We very much hope that they, like everyone else, feel encouraged to serve on PCCs, or as churchwardens and worship leaders, for instance, and are supported in exploring vocations to licensed lay and ordained ministries,” the guidance says.

“Nobody should be told that their sexual or gender identity in itself makes them an unsuitable candidate for leadership in the Church.”

The group, led by diocesan bishop The Rt Revd Dr Michael Ipgrave, also warn against “intrustive questioning about someone’s sexual practices or desires, or their experience of gender”, saying it is “almost always inappropriate”.

Last year the Church’s general synod voted to call on the Government to ban so-called “conversion therapy”, which is aimed at helping gay people change their sexuality.

It also voted to support the introduction of a new liturgy for transgender people, though bishops announced earlier this year that one was not needed, and that people in this circumstance could instead use the existing liturgy for affirmation of baptismal faith.

The new guidance, which is signed by three other bishops within the diocese, warns clergy that they may not “tell or insinuate to people that sexual orientation or gender identity will be changed by faith or that homosexuality or gender difference is a sign of immaturity or a lack of faith”.

If they are approached by someone unhappy with their sexuality, they must “be alert to the power relations involved in such prayers and conversations, and the possibility of spiritual or emotional abuse,” the guidance says.

It adds: “As Archbishop Justin has made clear, the perception that the Church is homophobic and transphobic is harming our mission, especially to young people.

“We need to challenge this perception by reaching out to LGBT+ people with the good news of God’s love, modelling God’s welcome and care for all people.”

At a glance | Why is the Anglican Church in crisis?

The roots of the rift between liberal and conservative wings can be traced back decades but the current crisis erupted in 2003 when the US branch of Anglicanism – The Episcopal Church (Tec) – ordained its first openly-gay bishop, Gene Robinson.

Conservative Anglicans believe this goes against the teaching the Bible but liberals say Christianity should be inclusive.

Several Anglican churches, particularly in Africa and Asia, have since broken ties with The Episcopal Church, as well as the Canadian branch of Anglicanism, over the issue of homosexuality.

A new, more conservative, breakaway church has also emerged in the US and Canada known as the Anglican Church of North America (Acna).

Matters came to a head in 2008 when many conservatives boycotted the Lambeth Conference, the once-on-a-decade global gathering of bishops, because Tec was present.There have been several initiatives intended to heal the rift since them, all of them largely ignored.

The Archbishop of Canterbury, Justin Welby, now want to overhaul Anglicanism into as a loose confederation to enable disagreement with full schism.

Progressive groups within the church welcomed the move. OneBodyOneFaith, which works to promote LGBT inclusion, said the guidance was “encouraging”.

The organisation’s chair of Trustees, Canon Peter Leonard, said: “It’s my hope that the work being undertaken by Lichfield diocese, and this clear statement, will send a very strong signal to LGBT+ people that they’re welcomed and valued on equal terms with our brothers and sisters.

“And to those who seek to treat us as a problem, to harm and dismiss us and deny our gifts and callings – that their behaviour will no longer be tolerated.”

The organisation added that it “understands that other dioceses are doing work along similar lines to Lichfield”.

Last year the Church released new guidance about homophobic and transphobic bullying in its 4,700 schools.

At the time the Archbishop of Canterbury said: “All bullying, including homophobic, biphobic and transphobic bullying causes profound damage, leading to higher levels of mental health disorders, self-harm, depression and suicide.

“Central to Christian theology is the truth that every single one of us is made in the image of God.”

Priests and bishops in the Church of England are allowed to enter civil partnerships, but not same-sex marriages.

They are allowed to enter into same-sex relationships only on the understanding that they will remain celibate.

Several gay priests have left the church in order to get married, while one, Jeremy Pemberton, lost a discrimination case after he was prevented from taking up a post as a hospital chaplain having married his male partner.