Karachi, Sindh, PK – A prominent transgender activist and international rising actor credited as being the first transgender model in Pakistan was removed last week as an organizer of a Women’s March because of accusations by fellow LGBTQ activists that he brutally raped a vulnerable adolescent, and threatened those who called out his sexual violence. 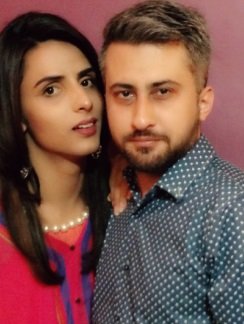 Kami Sid (left) with his partner

Kami Sid, a man who identifies as a transgender woman, has been charged in the rape of a 14-year-old adolescent who identified as a transgender girl. Sid’s boyfriend Sid Kami has also been charged for raping the then-minor, named Sana. Sana was between the ages of 14 and 15 and working for the couple in their home as a servant in 2015 when the alleged abuse occurred.

According to journalist, LGBT activist and founder of QueeristanPK, Muhammad Salman Khan, Kami Sid, along with his boyfriend Sid Kami “use to sexually abuse, torture and beat Sana at their flat in Gulistan-e-Jauhar, Karachi.”

According to activist and journalist Muhammad Moiz, a sympathetic worker took Sana to a doctor when Mr. Sid wasn’t home. The doctor found that the adolescent had been “visibly raped,” and was suffering from two sexually transmitted diseases. The child, in tears, repeatedly named the couple as the rapists.

LGBTQ activists describe Sana as a “trans girl” i.e. a confused boy who is pretending to be a girl. Mr. Sid “took a minor, from an organization supposed to be protecting our own kind, to her home, and the next we saw the minor, she’s raped, bruised and diseased,” Mr. Moiz said in a statement that was reposted on Twitter and Facebook by another of Mr. Sid’s critics.

Mr. Moiz called out those who continue to stand by Mr. Sid despite what he considers clear evidence of child rape:

I am DONE being quiet. This is the Kami Sid rape case. … As an assault survivor myself, I am done being quiet. We have to look inwards in our own small circles and fix them. Otherwise, we are just complicit. … There are still those who facilitated this entire continued abuse, and still patron Kami for their own social capital. You know who you are. Shame on you, and may you rot in hell for being complicit in the continued abuse of a minor under your watch.

Sana later complained about the rape to a guru. The guru provided mediation and helped Sana confront Mr. Sid, who paid out 10 to 15k. “Kami calls it kharcha, the guru of the victim/survivor calls it compensation for rape,” the lawyer wrote in a social media post.

Shumaila Hussain Shahani, a lawyer, wrote on Facebook: “The transwoman who accused Kami and his boyfriend Sid of rape was 18 or 19 when he died a few months ago (FIR of her murder nominates victim’s boyfriend for murder), and was 14 at the time of commission of the offense of rape. This news is PUBLIC KNOWLEDGE.”

“Since this information came out of the transcommunity and reached feminist circles, Kami has been threatening everyone into silence,” university student and blogger Minahil Baloch posted on Facebook. Attached to the post are screenshots of threats the film student accuses Mr. Sid of sending via WhatsApp. The alleged motivation is retaliation against the student for an earlier tweet. The Twitter post had urged: “Don’t support rapists even if they make it to Cannes 2019.”

Gallery of alleged threats to student by Kami Sid

The Aurat March takes place in Pakistan in observance of International Women’s Day, and has addressed such issues as honor killings, child marriages, wage inequalities, sexual harassment in the workplace and limited political representation. The organizers have decided that Kami Sid is not a suitable person to represent women.

Kami Sid not only identifies as a woman but also has the cheek to call himself a “feminist”. He is a tireless attention-seeker who has spent a fortune on surgery and makeover treatments to resemble a woman. He starred in film acting a woman, which has been chosen for the Cannes film festival.

To let a man pass as a woman or claim to represent women is mad in itself. When he turns out to be a horrible rapist and pervert this just proves that the world has gone mad.