Peter Bright is a scruffy journalist and ardent activist for so-called “LGBT rights”.

Known on Twitter as Pumpkin Fright,  he defines himself as “poly/pan/pervy” and ridiculed people’s fears of what trans would do to children.

Ars Technica writer. I do not speak for my employer. Retweets are endorsements unless ironic. Immigrant. Londoner, New Yorker, European. Poly/pan/pervy. He/Him.

On Twitter he insisted that if you don’t give transgender people everything they demand under all circumstances then you are “victimizing them” and driving them to suicide (yes that old myth). 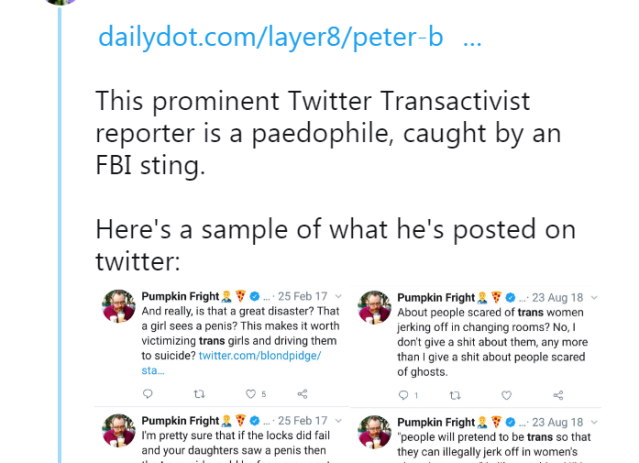 He also used Twitter to attack Chick-Fil-A, abuse President Trump, and to ask whether he was entitled to murder conservatives.

does this mean I can now murder republicans and use the “conservative panic” defence? 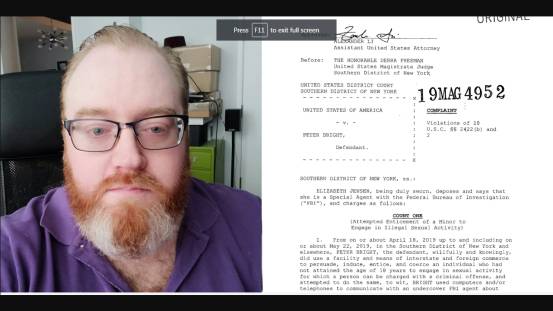 My body, my choice as to which parasites I allow to live within it.

NB Bright appears to suffer from some genito-urinary infection to judge from what he Tweeted on May 4th 2019:-

pissing razor blades sure is getting real fucking tiresome

Tech reporter Peter Bright has been arrested for soliciting sex with children online. He was employed by Ars Technica until recently.

A federal complaint alleges that Bright sought to molest a 7- and 9-year-old and met with an undercover agent for this purpose, at which point he was arrested. It also states that Bright claimed to be in a sexual relationship with an 11-year-old. He is currently being held without bail.

According to the complaint filed in the U.S. District Court for the Southern District of New York, an undercover FBI special agent made contact with Bright on KinkD, a social media fetish platform, on April 18.

Bright, using the handle “randomanon,” had responded to a message the agent posted a day prior in which she purported to be a mother seeking to connect with people who could teach her children about “birds and the bees.”

The complaint states that in subsequent messages, the agent informed Bright that she had a 7-year-old daughter and 9-year-old son.

At Bright’s urging, the two then began chatting via WhatsApp, which continued for a few weeks. At times using euphemisms, Bright reportedly wrote of molesting both children and raping the 7-year-old. He also allegedly sent pictures of his penis, and photos of test results showing he did not have any sexually transmitted diseases.

According to the complaint, both consistently referred to his plans to molest the children as “teaching” them “lessons,” and Bright described how he would begin slowly and move on to more intense sexual activity.

“I’m thinking maybe something involving foreskin is the way to start,” he allegedly said.

The agent writes that Bright inquired about whether the “lessons” were to be heteronormative. When she professed ignorance, he explained, “Does [the Girl] eat flowers and [the Boy] suck snake.” The document says that the agent understood “flowers” and “snake” to mean vagina and penis, respectively.

On his Twitter bio, Bright states that he is “Poly/pan/pervy.”

Per the complaint, Bright further claims to have molested an 11-year-old girl.

“I have a girl I’ve been teaching off and on for a couple of months now,” Bright reportedly wrote. “But she’s in the Bronx, which makes the logistics much harder.”

The conversation then shifted to Bright’s plans for the agent’s “children.” He reportedly wrote that he intended to touch and penetrate her daughter’s genitals, to have the girl give him hand jobs and oral sex, and to rape her.

Asked whether her daughter was a virgin, the agent wrote, “She has had the tip inside but not the whole cock … Does that excite you lol?”

Bright responded, “Yes. But I think the tip might be all I can manage.”

In subsequent days, Bright sent photographs and STD test results, after which the pair arranged to meet. Asked what the first meeting would entail, Bright allegedly said that he would “have them show him what they already know, and teach them about the foreskin on his penis.”

Bright was arrested on May 22 when he arrived for their planned rendezvous in Manhattan. Per the complaint, he admitted to speaking with the agent about “engaging in sexual activity with minors.” Bright has been charged with one count of attempted enticement of a minor to engage in illegal sexual activity.

He has been denied bail on the grounds of “risk of danger.” The order allows him to reapply for bail. The federal inmate database states that a Peter Bright, age 38, is currently being held at the Metropolitan Correctional Center in Manhattan.

Prior to his arrest, Bright was a successful tech reporter; he has a Twitter following of 18,000. On May 22, he tweeted numerous times; since then his account has been silent. His last story for Ars Technica, a Conde Nast brand, published on May 21. At Ars Technica, Bright covered topics like Microsoft and hackers.

An official with Condé Nast, which owns Ars Technica, confirmed the Peter Bright who was arrested was an employee with Ars Technica. A representative told the Daily Dot via email that Bright is no longer employed with the company.

If law enforcement locates the 11-year-old Bright allegedly said he was in a sexual relationship with, he could potentially be charged with far more serious offenses, such as rape.

You can read the criminal complaint against Bright online.