Are the queers infiltrating the Baptist Church? It may be happening right now.

Posted on August 9, 2019 by Editoralteam

… But compromising church leaders are now being exposed 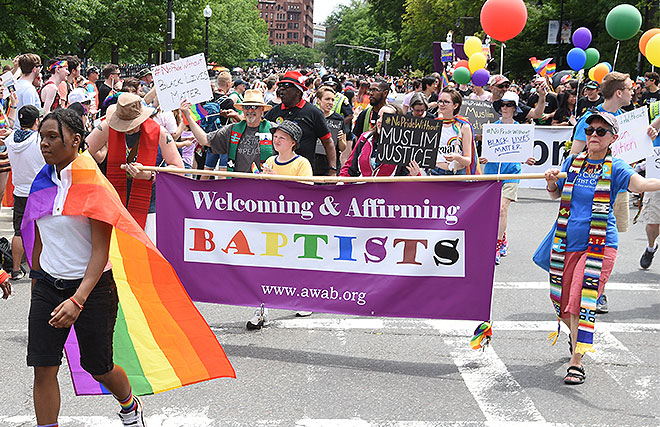 Marching in the 2018 Boston Gay Pride parade. Is this the future of the Southern Baptist denomination? [MassResistance photo]

In April 2017, Rev. Tom Littleton of Alabama gave a chilling talk on “How the LGBT movement is infiltrating conservative churches” at the MassResistance Citizen Action Conference in Austin, TX. For over a decade, he pointed out, the national LGBT movement has been funding a multi-million-dollar under-the-radar subversive campaign in Southern states to push the homosexual movement into conservative Christian churches. And they’ve been shockingly successful.

But an even bigger goal has been to infiltrate and subvert the overall Southern Baptist Convention (SBC), the largest Christian denomination in the South and the second largest in North America (after the Catholic Church). This year that goal has become frighteningly closer to reality. The events surrounding the 2018 Southern Baptist Convention’s annual meeting, held June 12-13 in Dallas, shocked many conservatives. 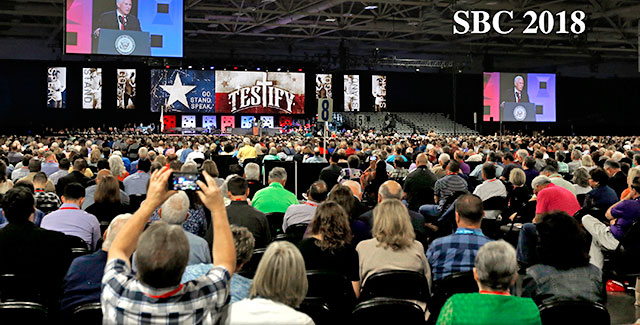 Purging of Dr. Paige Patterson. A few weeks before the SBC annual meeting, the de facto conservative leader of the Southern Baptist movement, Dr. Paige Patterson, was abruptly fired from his position as president of the Southwestern Baptist Theological Seminary by its board. He was subsequently removed from all influence in the denomination, including his keynote speech at the annual meeting. This followed a hysteria-driven, well-orchestrated effort over several months to discredit him for alleged misconduct decades ago. It’s hard to know if the charges were legitimate. He was not given a hearing, nor was his side of the story even sought before judgment was made. Over two dozen major donors to the Seminary sent this well-documented, strongly worded letter expressing their disgust at the corrupt and illegal way that Dr. Patterson was treated. But the board refused to reconsider their actions.

SBC elects new leader who is “accommodating” to homosexuality. At the annual meeting, the SBC overwhelmingly elected J.D. Greear, a moderate pastor who caters to millennials, to be the new president of the denomination. As Bryan Fischer of American Family Radio points out, Greear often goes out of his way to be accommodating to homosexuality in his messages. Greear has told his congregation to “love our gay neighbor more than we love our position on sexual morality” – which seems to many to be completely un-Biblical.

Powerful resolution on LGBT issues submitted at Convention.Dr. Robert Oscar Lopez is the leader of Texas MassResistance and a professor at the Southwestern Baptist Theological Seminary in Ft. Worth. As the Convention began, Dr. Lopez and a group of other Baptist Texas MassResistance activists submitted a powerful resolution on LGBT issues titled On Ministry and Counseling to Lead People from Homosexuality to Heterosexuality.

The resolution basically reiterated fairly standard Christian teaching on homosexuality: Among other things: No one is “born gay” and “cannot change”; To say “I am gay” is a rejection of God’s design. It states: “RESOLVED, the Southern Baptist Convention rejects as heresy any claims that God makes people homosexual…” It went on to say that reparative therapy and similar efforts to free a person from the grip of homosexuality should be supported by the SBC.

Resolution quashed by Convention leadership. Some “moderate” SBC leaders have been on record as opposing any kind of reparative therapy. The Convention adopted over a dozen left-leaning and Social Justice-type resolutions (on gun control, immigration, etc.). Lopez’s resolution was the only one submitted which addressed the LGBT movement’s push against orthodox Christianity. The Resolutions Committee refused to allow it to go to the floor for a vote, claiming that it needed “more clarification.” However, on the last day one of the Texas MassResistance activists was able to come to the podium to speak. He began to call for this resolution to be voted on, but the Chairman interrupted him and announced that the Convention time was over and adjourned the meeting!

Troubling “Revoice” Conference – ties to SBC? Another dangerous component of the LGBT movement’s war on Christianity is the upcoming “Revoice Conference”taking place in St. Louis on July 26-28. It is a slick, well-funded effort targeting Evangelical Christians, to encourage them to accept and embrace homosexuality into their religious life. The stated goal is: “Supporting, encouraging, and empowering gay, lesbian, same-sex-attracted, and other LGBT Christians so they can flourish while observing the historic, Christian doctrine of marriage and sexuality.” In other words, it is three days of expert training to equip LGBT activists and their allies to infiltrate Evangelical churches to normalize homosexuality and subvert the teachings of the Gospel. (In addition to all this, the organizers of “Revoice” have a similar conference in October targeting youth pastors to bring the LGBT agenda to church youth.)

Even more troubling is that a number of so-called conservative Southern Baptist Christian leaders have bought into the “Revoice” conference. This article, Trusted SBC and PCA Seminaries Producing LGBTQ Activists, is particularly jarring.

Rev. Tom Littleton forcefully thrown out of convention. Since last year’s MassResistance speech, Rev. Littleton has been prolific in exposing the LGBT agenda permeating the upper echelons of the Southern Baptist Convention. This has clearly angered the guilty parties and their allies. Rev. Littleton attended the SBC annual meeting as a member of the press (not as a church representative) specifically to find out about the ties between SBC leaders and the Revoice conference.

On the first day, June 12, Rev. Littleton caught up with two major SBC leaders, Russell Moore and Al Mohler. Moore denied any knowledge of Revoice (after being informed of it the previous day), and Mohler allowed him to ask some questions — but then their handlers quickly shooed him away. The following day, just before Moore’s question-and-answer session at the podium, Rev. Littleton was suddenlythrown out of the building by the police. Why is there so much secrecy around this issue? This is very disturbing to many conservatives in the church.

Dr. Lopez escalates fight to “Save our Churches”

Most Southern Baptists are completely unaware about the forces that are working to infiltrate their denomination, and the trusted church leaders who are shamelessly compromising Biblical teachings to allow them in. Since the SBC annual meeting, Dr. Lopez has written some illuminating articles and appeared on Christian radio. Here is a sample:

“Beyond Friendship: LGBT Issues and the Next Stage of Discernment”(written with Rev. Littleton) [NOTE: scroll down for the article]

Dr. Lopez is also planning an exciting new regular MassResistance video program devoted to this subject, tentatively titled “Save Our Churches!” He’s hoping to begin it this month. Watch for more information on that.

The LGBT movement is obsessed with destroying traditional Judeo-Christian belief, and is using its vast resources to infiltrate and subvert churches everywhere. They use very sophisticated techniques. Unfortunately, many church leaders are easy targets for them. It’s happening in one way or another across America – and all over the world. And most good people don’t even realize it until it’s too late, and feel helpless. But MassResistance is devoted to helping all of you fight back! 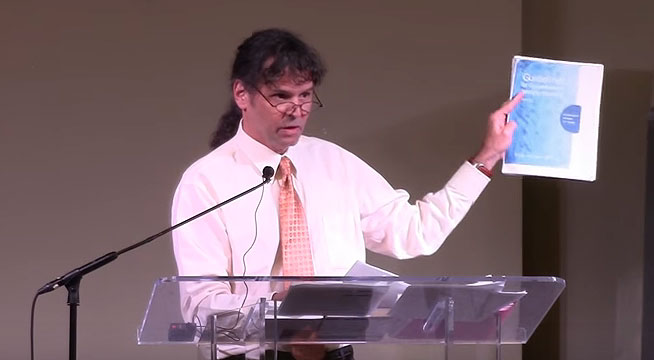