Posted on November 4, 2019 by EditorialTeam

Jonathan Yaniv is a creepy Canadian transgender who likes to pose as a woman and call himself Jessica. He has not had any sort of surgery, has not lopped off his dick, yet thinks that just because he puts dresses on his paunchy body and make-up on his pit-bull features he can pass as a woman. 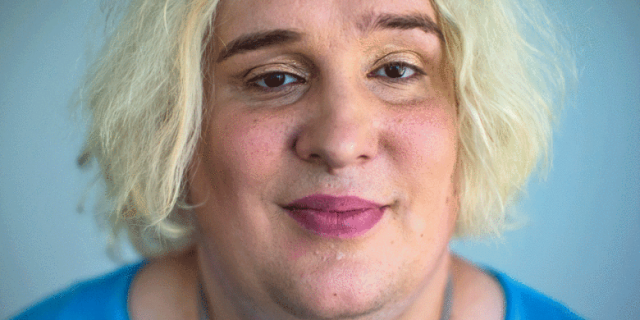 And legally everybody has to call him one. A mad law he decided to take full advantage of. How? By the simple expedient of going to a series of ladies’ beauty salons, and demanding that they carry out full waxing for hair removal all over his body. Even on the genitalia that the stupid queer law calls “her balls”. Well, it can’t be HER balls can it? Only men have testicles.

Naturally the female employees refused to do this. They are only trained to wax women and don’t feel comfortable handling the genitals of a strange – a VERY strange – man. They are nice, normal people and a cosmetician is not a whore.

Yaniv behaved like every litigious queer in the world, and rushed out to sue the whole lot. He assumed that the law of “gender self-identification” would be on his side. It’s a rubbishy queer law that says “I’m a man or a woman if I say I am  – regardless of reality.” So all he had to do was list the names of the salons, sixteen of them, and demand $15,000 from each in compensation for his poor little hurty feelings  – right?  $240,000 in the bank!

That is what most people thought would happen. There was a lot of argy-bargy about Yaniv on social media and despite a court order to refer to him only as “JY” his identity was widely known and a lot of people started to find the courage to speak out about queer craziness. Yaniv, who is a close friend of the Twitter bosses, got many of these people banned from social media.

BUT HE LOST HIS CASE! The court in British Colombia had a sudden attack of sanity, and realized that Yaniv is only half mad, and the other half is a greedy, money-grabbing, attention-seeking bully. He had set this up trying to get rich quick and the court rightly concluded he was “disingenuous and self-serving”. Hurrah!

YGB says: We look forward to the repeal of these stupid laws that compel decent people to affirm the fetishes of perverts.

Well, this is good news for a change. The infamous Jonathan “Jessica” Yaniv has lost his case, which made headlines around the world and attracted attention from the likes of Ricky Gervais. From LifeSiteNews:

The British Columbia Human Rights Tribunal ruled today against transgender activist Jonathan “Jessica” Yaniv who had made formal “discrimination” complaints against a number of female beauty technicians for refusing to wax his genitals on the premise that as a “woman” he was entitled to be serviced by them. The court ruled that aestheticians who work from home have a right to refuse to handle male genitalia against their will.

“Human rights legislation does not require a service provider to wax a type of genitals they are not trained for and have not consented to wax,” the decision stated. The decision further found that Yaniv “engaged in improper conduct,” “filed complaints for improper purposes,” and that Yaniv’s testimony was “disingenuous and self-serving.”

The Tribunal finally noted that Yaniv was “evasive and argumentative and contradicted herself [sic]” while giving evidence. “Self-identification does not erase physiological reality,” stated Jay Cameron, the Justice Centre’s Litigation Manager, and counsel for the aestheticians. “Our clients do not offer the service requested. No woman should be compelled to touch male genitals against her will, irrespective of how the owner of the genitals identifies.” The trans activist, who calls himself a “proud lesbian,” made international headlines this summer for his discrimination complaints launched against 16 beauticians for refusing to wax his male genitals.

Jessica Yaniv identifies as a woman but possesses male genitalia. In March 2018 Yaniv approached the aestheticians and requested a “Brazilian” to remove pubic hair from the groin area. When the aestheticians refused to provide the requested service due to a lack of personal comfort, safety concerns, a lack of training, and/or religious objections, Yaniv filed complaints against them alleging discrimination based on gender identity and gender expression. In total, Yaniv filed 15 complaints against various aestheticians in the Vancouver area seeking as much as $15,000 in damages against each aesthetician.

Yaniv has made numerous public comments against immigrants. At the hearings, Yaniv contended that immigrants use their religion to discriminate against trans people because they refused to wax the male genitals of those who identify as women.

The Justice Centre represented Blue Heaven Beauty Lounge and its owner, Sandeep Banipal, who is an adherent to the Sikh religion. Ms. Banipal testified that she was not trained to wax male genitals and that it “is not something I am comfortable with.” The Justice Centre also represented Sukhi Hehar Gill, who was forced to close her business due to the complaint against her. Ms. Gill, also a practicing adherent of the Sikh faith, provided waxing services only to female clients, attending alone at her clients’ homes. She explained in her response to Yaniv’s complaint against her that it “is contrary to my faith” to provide waxing services to a biological male. Yaniv had requested that Gill attend at Yaniv’s personal residence to provide arm and leg waxing services. Finally, the Justice Centre represented Marcia Carnauba, a third aesthetician who was suspicious about Yaniv’s behaviour in advance of the appointment and canceled it as a precaution. Ms. Carnauba also does not have the necessary training, tools or comfort level to perform waxing services on male genitalia. Ms. Carnauba closed her aesthetic business following the complaint against her.

The Justice Centre noted that an expert in genital waxing testified at the hearing, informing the Tribunal that aestheticians who are not trained in male genital waxing should not attempt to wax a penis and scrotum due to the risk of serious injury to the customer.

The Justice Center noted that most of the women who were the target of Yaniv’s complaints work out of their own home, are of immigrant background, and have small children with them in the house during the day. A publication ban had identified Yaniv only as JY for most of the proceedings until the aestheticians successfully brought an application to have it lifted.

The Tribunal ordered costs against Yaniv in the amount of $2000.00 payable to both Banipal and Carnauba.