Shrewdly used as a psychological weapon and enforcement tool

Public unaware such surveys are imposed on staff 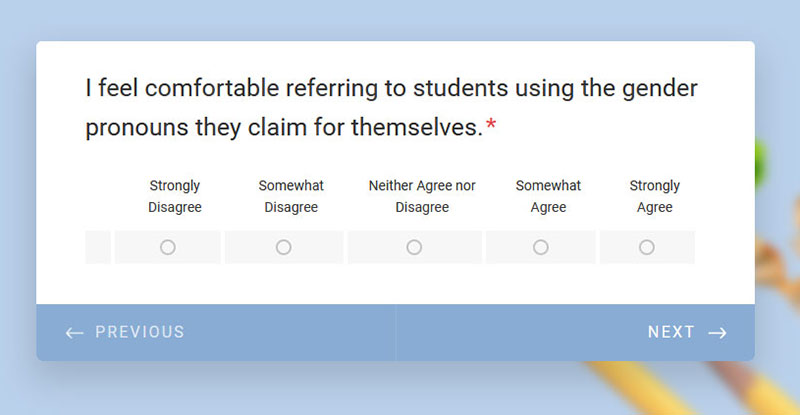 Screenshot from the online survey given to teachers at Massachusetts middle schools.

This is the first report in our series on insider material forwarded to us by teachers, parents, and local activists from across the country. You will learn what’s going on behind the scenes in your schools.

Many of us have seen the outrageous sex surveys that middle and high school students are given that include questions making deviant behavior appear normal to kids. But few parents are aware that the same technique is being used on the teachers in a powerful and psychologically devious manner.

In order to effectively push its agenda on children, the LGBT movement must force teachers to take many actions that may go against their nature. The first step is getting them to accept unscientific nonsense (especially regarding “gender”). Then, the teachers must be convinced to impose these beliefs on children.

As we described earlier, the teaching profession has been overwhelmed by dysfunctional people and committed radicals. Those teachers don’t need much of a push. But the teachers holding traditional values are the ones who must be intimidated and threatened.

Last month, a middle school teacher in Saugus, Massachusetts shared with MassResistance a disturbing survey that the teachers at her school were being asked to fill out. It was also given to teachers at another middle school nearby, and likely others.

The survey was written by the Everett LGBTQ+ Youth Space and Resource Center (ELYSRC), a slick “local” LGBT organization which clearly appears to be organized and funded by outside forces. The survey is not the work of amateurs. The questions are professionally crafted to intimidate, indoctrinate, and coerce into action.

The survey was divided into four sections which we’ve reproduced below. Throughout the survey, the required questions are followed by an asterisk.

The survey started by asking an optional question: “Do you identify as a part of the LGBT+ community?” If yes, they’re asked, “How do you identify? (ex. Lesbian, Non-binary, Queer, etc.)”

Section 1 is particularly heavy-handed. It starts the survey with some “enforcement” questions that are reminiscent of Maoist totalitarian regimes.

In this section, you will determine the level to which you are likely to act in accordance with the following statements. (7 questions) 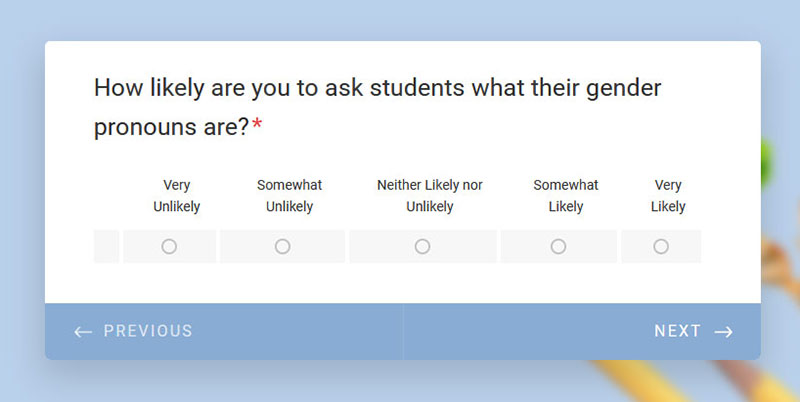 Section 2 enforces the teachers’ requirement to accept as truth the range of absurd, unscientific quackery that makes up today’s LGBT ideology. Also, keep in mind that until the homosexual movement terrorized the medical societies into changing their definitions, there was no such thing as “LGBT people” in medical terminology. Rather, they were considered to be heterosexual people with homosexual (or transgender) disorders. Also note that a question near the end appears to be an attempt to expose Christian teachers.

In this section, you will determine the level to which you agree or disagree with the following statements. (36 Questions)

Section 3 goes further in coercing the ridiculous concept of “preferred gender pronouns” along with “preferred names.” Adopting these twisted language conventions has resulted in horrible and tragic mental health consequences for vulnerable middle school children, and has led to at least one federal lawsuit by parents. The idea that following these procedures actually “protects” children is preposterous. And it distracts teachers from the job they should be focused on: actually teaching. Note the reference in questions 4 and 5 to enforcement by the school administration.

In this section, you will respond to questions with a definitive “yes” or “no.”
(6 Questions)

Section 4 is distressing because it brings up outside-of-school “LGBTQ related resources” which teachers are encouraged to steer children to, without parents’ knowledge. Note also that an upcoming “professional development workshop” will be on LGBTQ issues.

In this section, questions are open-ended and to be answered in a short answer format. Questions are optional, you are not required to answer. (2 Questions)

This survey or similar ones are without a doubt being given in school districts across America.

Make no mistake: This kind of jack-booted pressure on teachers to twist the minds of our nation’s children – working hand-in-glove with the depraved LGBT movement – reflects the mindset of our educational establishment, including the Principals, guidance counselors, Superintendents, and administrators. That establishment is what MassResistance helps parents confront.

Coming next: There was a companion survey given to the middle school students at the same schools, written by the same LGBT organization – also without parents’ knowledge. Wait till you see that!

1 Response to Middle Schools and Surveys